Participants from 5 different countries helped in summer 2021 RESCUEing an area in Tramonti, the Central Market Square. It is a square in the center of Tramonti that hosts the market of the town. Joana Torgal, a Portuguese artist (@jtorgs), together with the whole group managed to create a real „manifesto“ that tells the essence of Tramonti.

„We aimed to perceive the atmosphere of Tramonti, the empathy, the sympathy of its citizens – said Joana – and the spirit of sharing, characteristics that are not seen but felt in these parts“.The painting depicts churches, mountains, grapes, our ancient tomatoes, lemons, mozzarella, pizzas, and is an idea of a „neighborhood“.

The painting depicts churches, green spaces, mountains, grapes, our ancient tomatoes, lemons, mozzarella, pizzas, liqueurs. It is an idea of a “neighborhood” with peasants, pizza chefs, vendors, activities such as trekking, traditional dances and the most characteristic vehicles that can be encountered. They thus represented the place that welcomed them, as they saw their eyes and their hearts. 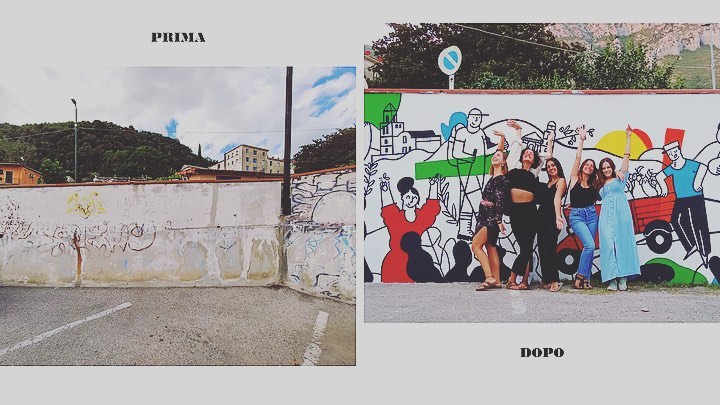 The Murales on the Central Market is an important step of the RESCUE project. It is very important for us to be able to lead people towards art. Indeed, art can help to make changes. Located in Polvica, this marketplace looked abandoned for who did not know that on saturdays the local market was held there. The walls were sad and didn’t invite you to spend some time around the square. The idea was not only to RESCUE it but to give people inspiration to come and organize other activities, workshops or to play around. Also it can be a source of inspiration for other art RESCUE projects. They started by cleaning and painting the walls in white, in order for them to paint and draw on it. Then, they were able to make this beautiful manifesto.